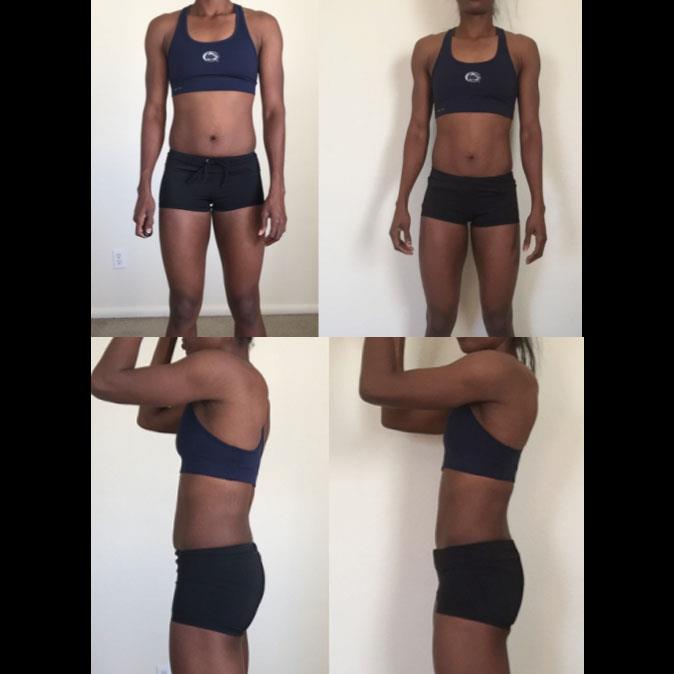 My starting weight was 146 and then it increased to 147 within that first week. Not that I wasn't sticking to the program, but I started pigging out between the time I told Alexa my starting weight until the start of my program, I just felt it was necessary (lol). Once I started my program, it took me some time to adjust but I knew I had to commit 100% because I was tired of never fully reaching my goals with my body. Throughout the next couple of weeks, my weight didn't change much, only lost about 2 pounds but I was seeing slight body changes and I was pleased. Once I got to around week 6, I started to think I wasn't seeing more changes fast enough, and it made me a little frustrated. That's when I decided to go on the FB page to find some motivation, and that I did. So many people were saying how they were on week 20 or 40 and how they hadn't started seeing major changes in their body composition until around week 12 to 16 into their program. It made realize I needed to be more patient with my own journey. I used to think I could get a flat stomach in a month if I did everything I needed to do to get it but that was far from reality for me. I also always had in my mind how unfair it was how people/athletes that ate worse than me, were more lean than I had ever been, and it didn't make sense to me. But with this program, I learned to understand that each person's body is different and what works for someone else, won't necessarily work for me. So here I am at the end of week 11, and I am only down 5-6 pounds (because I sometimes fluctuate by a pound during the week) and have never been so lean! And I want to also add, that I have never been so strong! All of my maxes have gone up and I have stayed healthy all throughout preseason, which I think has a great deal to do with me knowing exactly what I am putting in my body, and hitting my numbers every day.

I had never heard of WAG, or ever seen any advertisement for the program. My first time learning about WAG is when I stumbled across a post on my explore page on IG and I was interested in knowing more. I went to the website to find out more information and what the program was all about, and to my surprise, I was very interested. I put my name on the waiting list and hoped to hear back soon. Well, it wasn't until about 7 weeks later when I got an email saying I was off the waiting list and I could join team WAG. By this time, I had been losing weight already and felt I could keep going on my own. But as the day passed, I remembered how I had gotten to the point where I was with my body composition in the past, and then never could get any further, or I would go backwards. I went back and forth on my decision to join WAG for the next 48 hours because I knew it would take a lot of dedication and I would have to make some financial sacrifices in order to join WAG. There were a couple things that ultimately made me join. First, was a quote my high school coach used to tell me, "when you want to get something you have never had, you have to do something you have never done" and this quote kept replaying in my head. Second, I thought of this as an investment, I had to invest in myself now, to make sure I could set myself up for a better future (track season). I'm not sure why I trusted WAG so much when I didn't even know much about the program, or what it really offered me but my intuition told me, this was what I needed. So with all of this, I joined and decided that I would just do the first 3 months and that's it. But now closing in on week 11, I do not see my ending with WAG just yet. I have seen so much improvement not only physically and mentally but also in my understanding of food and nutrition and tracking what I put in my body. In the beginning, I was very overwhelmed but now it is much easier. Little things like discovering "volume eating" and what foods I can add to my list of "volume" makes me excited. Also, trusting my coach, Alexa, had a lot to do with me getting through those tough days when I thought I wasn't going to ever see any more progress. I trust in what she tells me 100% and that is what makes our coach/athlete relationship work. My pictures below are from the start of my program to week 9, lots of progress has been made, and much more to come!